← more from
Nuclear Blast
Get fresh music recommendations delivered to your inbox every Friday.
We've updated our Terms of Use. You can review the changes here. 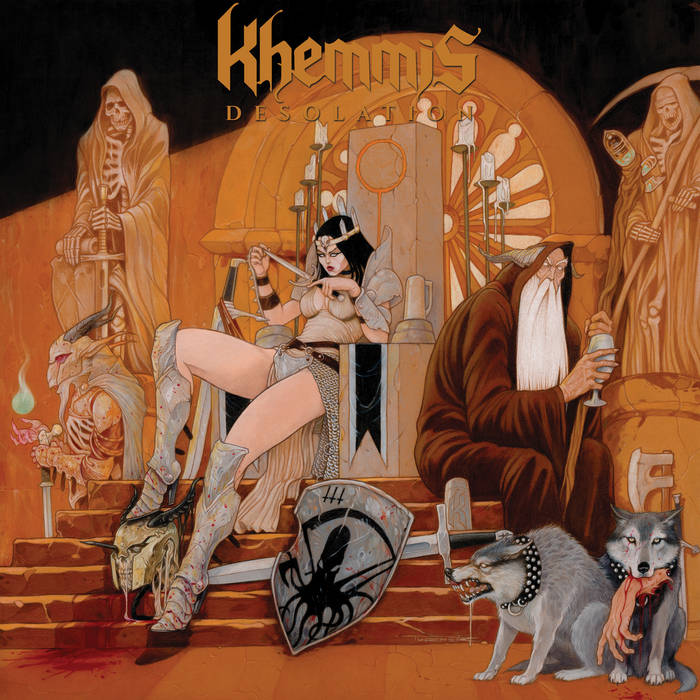 Anticipation was high for the release of ‘Hunted’ in 2016, the sophomore album from Denver’s Khemmis and follow up to acclaimed debut ‘Absolution’ . Rather than the all too common sophomore slump, Khemmis raised the stakes and blew everyone away with their rapidly progressing songwriting and production quality, culminating in ‘Hunted’ being named Album Of The Year for 2016 by Decibel Magazine.

Now in 2018, after wrapping up the Decibel Magazine Tour with Enslaved, Wolves In The Throne Room and Myrkur, the excitement for Khemmis’s third album ‘Desolation’, due June 22nd, is palpable across the metal spectrum. Fortunately, when you hail from a place known as the Mile High City lofty expectations come with the territory and the band has created what will come to be known as the definitive Khemmis classic.

From the stadium-sized opening notes of ‘Bloodletting’ it is immediately evident that Khemmis are again putting distance between themselves and their earlier influences to inform a sound that is singularly their own. ‘Isolation’, recently aired live on the Decibel Tour, is the album’s lead single and most immediate track, with the classic metal melodies the band have become revered for shining throughout. On epic closer ’From Ruin’ and throughout the entirety of the album, the lead vocals and melodies of Phil Pendergast are the clearest, most powerful and best arranged that the band has achieved. Working for the third time with Dave Otero at Flatline Audio in Denver, the band and producer now have the familiarity and mutual experience to arrive at the perfect symbiosis of songwriting, arrangement and production value.

While Khemmis are undeniably influenced by Doom and Classic Metal, to tag them with those labels doesn’t do justice to what’s accomplished on ‘Desolation’, a perfect representation of modern Heavy Metal in 2018 that integrates the past in a way only possible in the present. ‘Desolation’ is not just the best Khemmis record to date but a testament to the quality that Heavy Metal is still capable of.

Bandcamp Daily  your guide to the world of Bandcamp

Semiratruth joins the show to discuss their latest release, "loading..".